I Am Not Joey Pigza by Jack Gantos 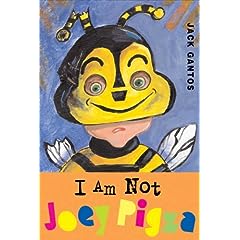 I have long been a fan of Jack Gantos and his Joey Pigza series, and there is now a brand new book, I Am Not Joey Pigza. I cannot believe it has been 3 years since Gantos has written a book about Joey. This year some of my students listened to Joey Pigza Swallowed the Key and Joey Pigza Loses Control. They thought both were great. They related to the main character Joey on so many levels. I thought it was neat that after listening to the first book the students were so excited they demanded I get the second book on tape as well. The third book is titled What Would Joey Do?
In this the fourth installment of the life of Joey Pigza, Joey's good-for-nothing dad has again arrived at the door. This time he swears he has changed and has even taken a new identity. (Clue number one that he has not) He wants Joey and his mother to change their identity as well. (By the way, Carter Pigza, Joey's dad has won some money in the state lottery)
As you know, I never like to give hints to the plot of the story, so you will have to read to find out if Joey and his mother follow along with the scheme.
One thing that was missing from this story was the wacky grandmother, Grandma Pigza, who is in the other stories. She has passed away from her horrible smoking habit. I missed her in this book. She really brought out some goofy behavior in Joey.
Another slightly disappointing part of this book is the fact that Joey is suppose to be in the sixth grade, but his character tends to still come across as a third or fourth grader. I know he is suppose to be very immature, but for Joey to hold the interest of repeat readers of the series, it seems as though he would need to have some of the issues of a twelve-year-old.
The plot lends itself to a sequel so I will be keeping my eyes peeled.
Posted by Megan Germano at 3:40 PM

Great post. I am looking forward to introducing Joey Pigza to my 5th and 6th graders next year. Keep up the excellent work.

Please consider submitting any picture book reviews to my Picture Book Carnival over at http://mentortexts.blogspot.com.