Probably the World's Best Story About a Dog and the Girl Who Loved Me by D. James Smith 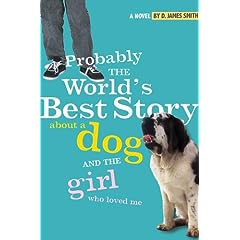 As I said in a previous post, I read this book a little out of order but it didn't really matter! (I love that) Probably the World's Best Story About a Dog and the Girl Who Loved Me by D. James Smith. The second book about Paolo O'Neil finds Paolo, his cousin, and the rest of the large O'Neil family during the summer of 1951. Paolo, his deaf cousin Billy, and even Paolo's little brother Georgie, to some extent, have begun a paper route. This story, like the first, The Boys of San Joaquin; it has a mystery to be solved. Unfortunately, that mystery is a little less a part of the plot as I would have hoped. However, I don't love LOVE mysteries so it wasn't terrible. This book also had a bit of romance in it, in the context of 12 year-old love... if you consider that romantic.
The editorial review on Amazon.com from School Library Journal claims that some of the American Sign Language descriptions included in the title of the chapters are "contextually inaccurate." I have no idea if this is true or not, as I do not know sign language. Maybe it has something to do with the fact that the book is set in 1951 and some of the signs have changed??? Who knows. I recommend this book anyway.
Posted by Megan Germano at 9:43 PM