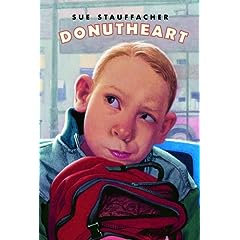 Each time I would get on the Bookmobile that visits our school, I would see this book called Donuthead by Sue Stauffacher. If you have ever seen the cover of that book, you would know it was hard for me to pass up. It just looks F-U-N-N-Y. And it was. So now I see in the library there is a sequel, Donutheart by Sue Stauffacher.
Basically you must read the first to understand the second, otherwise you will wonder "What the the heck is up with this kid?" Franklin Delano Donuthead, the main character, is a rare bird. I am sure I have met his type along the way, and enjoy trying to pinpoint his real life equal. He is, in his own words, "asymmetrical" because one side of his body is longer than the other. (Something he likes to measure nightly.) He is also very cautious, a germaphob if you will. Someone he contacts on a daily basis is Gloria Nealot, his favorite chief statistician at the Washington D.C. National Safety Department. In the first book, Franklin meets Sarah Kervick. Sarah becomes Franklin's body guard, of sorts and Franklin her tutor, of sorts.
The second book finds Franklin and Sarah still friends, Franklin still measuring, Gloria still being called daily, and Sarah much worse off in her family life than before. Something new about this book is Franklin is in love. (A very strange place for Franklin) Also, Sarah has begun figure skating.
Although I liked the first book better, I still really enjoyed reading about Franklin maturing into middle school. I didn't get that lump in my throat feeling I had at the end of Donuthead, but I would recommend the book. The book definitely ended in a way that lent itself to a third book. I will be waiting and watching.

Wait a second, your school gets visits from a Bookmobile. Tell us more about that. Harry Sue, also by Sue Stauffacher is one of my all time favorites, but I haven't read either of these yet. Thanks for the summaries.