Diary of a Wimpy Kid Do-It-Yourself by Jeff Kinney

When I first began this blog, I was really excited to read the very first Diary of A Wimpy Kid by Jeff Kinney. I thought I had found a perfect book for reluctant readers and I was correct. In February I read the second book Rodrick Rules and I was thrilled to find out it was just as good as the first. I was worried somewhat when I saw how popular and commercialized the book was becoming. However, just like most teachers, parents, and even authors, who cares... as long as it gets them reading, right? While I am waiting for the third book The Last Straw, I received this really cool book, Diary of a Wimpy Kid Do-It-Yourself.
On Jeff Kinney's Blog, he describes the book as

"...really hard to describe. It's kind of a part comic book, part activity book, part blank journal. The hardcover book has 16 pages of full-color comics in the middle."

And that is exactly how I would describe the book. I book talked the book in my class and showed them a bit of the book. They were very excited, until I told them I only had one copy and would have to use it as a SUPER DUPER prize. I guess that will keep them on their toes for a bit! ;)
More exciting, the book I received came with information on entering a Do-It-Yourself Comic Contest. Many of the students were very interested in this contest. I think there will be a lot of competition out there with this new fascination with comic books and even more after they practice their comic skills using the Do-It-Yourself version of Diary of a Wimpy Kid. 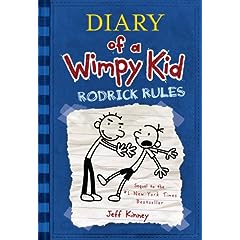 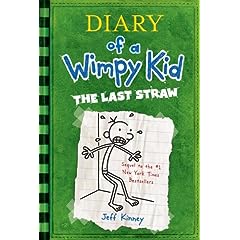 Posted by Megan Germano at 8:46 PM

This is doing very well at my book fair. Not as clever as Captain Underpants, but it does get children reading!