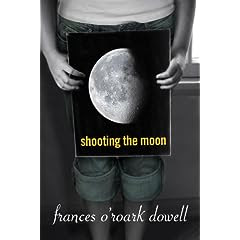 When I was on vacation I devoured Shooting the Moon by Frances O'Roark Dowell. At first I felt like I wasn't sure it was the book for me, but as I read on, I really Loved It!
The story is short at 150 some pages. It is historical in nature, the setting being during the Vietnam War. (And of course you know I love that) But what is HUGE about the book is the message about changing perspectives.
Jamie, the main character is an "Army Brat" whose brother has recently joined the army and will soon be sent to Vietnam. Jamie lived her whole young life believing there was no better place to be than fighting for your country in war. That is until she actually comes face to face with the realities of war. Her brother's first letter home to Jamie is less of letter than she would like to receive. Instead it was a roll of film he would like developed. Not just developed by a store, but actually developed by Jamie herself. As the story goes on the pictures become more and more truthful with the realities of war.
This isn't the only plot line going on in the story either. Jamie has a summer job working in the rec hall where she becomes friends with some men in the army. And there is also the story of how Jamie's Colonel father deals with her brother's deployment.
I think students in my class could really get behind this book. Not only is our town situated very near to an Air Force Base, placing many military children in our district, but there is a war currently happening. This book would really be a great starting board for talking about some of the harsh realities behind war. Frances O'Roark Dowell is very careful not to be too preachy about war or even too supportive of war. The novel had the perfect balance for me.
Take a small portion out of a day and sit down with this special novel. You won't be disappointed.

Other Reviews:
A Fuse #8 Production
Kiss the Book
Brenda Ferber's Blog
a wrung sponge
Posted by Megan Germano at 9:21 AM

I was also hesitant to pick this one up, but after reading so much about it online, I decided I better check it out. I loved it too!

I was hesitant to pick this up too, afraid the subject might be too heavy for our readers. Boy was I wrong! Frances O'Roark presents it in a kid friendly open way. I loved the book!

This one has been on my to-read pile for a while. Thanks for the review - I'm now going to take it with me to read over the weekend.