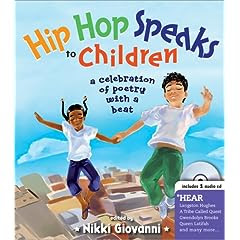 I love when I find good poetry that speaks to kids. Hip Hop Speaks to Children by Nikki Giovanni really is that kind of book. It is a collection of poems and song lyrics including poems by the author Nikki Giovanni a well known poet, writer, activist. It also includes an companion CD. Sometimes it is hard for people to think of anything but "Rap" when they hear the words "Hip Hop." Hip Hop is so much more than that. It has rhythm, soul, and poetry. Not only that, but it is poetry kids relate to today.
As I picked a few poems to read aloud to my class, I thought about topics that are close to their hearts right now. I found so much that fit! Poems such as "Why Some People Be Mad At Me Sometimes" by Lucille Clifton, "Books" by Eloise Greenfield, and "For Words" by Bejamin Zephaniah. But best of all was when I could read "From Principal's Office" by Young MC and tell the class that it was a rap song when I was in Junior High. When they didn't believe me, I could whip out the CD that accompanies the book and play the song for them! Oh, they thought that was great! What a better way to interest students in poetry than by showing them that their own favorite artists were originally inspired by poetry.
And I guess I just realized this, but Nikki Giovanni grew up in Cincinnati, OH. Just down the road from us! How cool is that?

I just heard about this book this week, too. I'll have it in my hands at the library before the week is out! It sounds great. I've always liked Giovanni's work.

I love Nikki Giovanni's books...can't wait to order this one for my library.