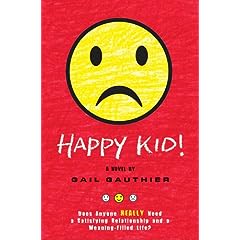 So I read this book Happy Kid by Gail Gauthier. That is all I have to say...
Just kidding, but I am finding it hard to talk about this book.
I thought it was witty and funny and it captured the essence of a seventh grader who is a little unsure of himself and his abilities. Maybe I have just read too many books recently where the kid is a middle school "loser" in his own eyes. I just thought it was very unrealistic that this so called "unmotivated" 13 year-old would venture into reading a self-help book that was a gift from all people, his mother. Give me a break! Ain't gonna happen. Period.
One part of this book I did get into was the subplot of the State Assessment Test they had to take. (aka "The SSASies") Ha Ha, pretty funny. The fear the teachers had of this test (ie passing out practice sheets the first day of class) to the fear everyone had when it seemed there could have been some possible shady doing's prior to the test (ie a teacher gave a practice question that ended up on the test) Now these events I could relate to. These are the things middle school teachers worry about.
I also liked the fact that the main character, Kyle, was in accelerated classes. He felt, and even his family felt, he had put there by mistake. It turns out he had not. I related to the feeling of overwhelming dread Kyle had for those classes. Feeling as if he could never live up to the position and as if he was always 2 steps behind. The feeling of not being sure whether you should stick by old friends from elementary school, or try to fit in with the new group of "smarties" to which you were now a part.
All and all I would recommend the book. There was a lot going on that I felt didn't belong, but there was too much of it to even get into.
If anyone has read this book and fears I am not giving it a fair chance, feel to comment and give your opinions. I just may be too far out of it to understand. I will stand to be corrected if I am in fact being too critical.
Posted by Megan Germano at 1:58 PM