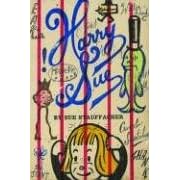 Harry Sue by Sue Stauffacher is certainly one interesting book. From the title, to the prison lingo (Joint Jive) glossary, to the concept of the plot. I must say I thoroughly enjoyed the book. In the past I have read two other books by Stauffacher, both about a main character named Franklin Delano Donuthead, so I was not surprised by Stauffacher naming her main character Harry Sue, but none the less it was hard to get use to reading about a sweet main character named who was named Harry Sue.
Harry Sue is such a layered novel. The characters are all so unbelievable they are believable... especially if you are a teacher and have seen any dysfunction. Which of course we all have. I would recommend the story to an older reader because I feel the significance would be greater and the message would carry more weight with someone in 7th or 8th grade.
Harry Sue is the daughter of two convicts and is "doing her own time in life" living with a horribly cruel grandmother who scams unwitting parents into leaving their innocent children in her care at a crummy daycare. Harry Sue wants nothing more than to meet up with her long lost mother in the "clink." She has learned lots of "Joint Jive" and speaks to the reader using phrases such as "con" (male convict), "conette" (female convict), "fish" (new convict), and my very favorite "J-cat" (someone in the "ding-wing" aka: a nut) I am definitely going to start using that one.
Another layer to the story is Harry Sue's friend Christopher aka Homer. Homer was in a serious accident leaving him with a C4 spinal injury or quadriplegic. He is doing "his own time" as well, but in an entirely different hell. (Excuse that term, but I can't think of a better one.)
I often got lost in the layers and lingo, thus the reason for recommending it to upper grade. There is so much more to the story than what I am including here. There are other characters, other problems, other joys, and other sadness, but I think you may do better reading and finding them on your own. ("Joy" you are saying... I don't see any "joy" here. Read the book!)
Oh yeah...One more neat factor is the way Stauffacher sprinkles the book with quotes from Harry Sue's favorite book The Wizard of Oz.
Posted by Megan Germano at 5:28 PM

Thanks for contributing this post to the September Carnival of Children's Literature, now up and running at my blog!