Darn, Darn, and Darn again! I am going to have to quit teaching and just work with only books because it is so easy for them to get away from you with all the other responsibilities of teaching. Had I seen these beautiful picture books a couple weeks ago, I could have nominated them for a Cybils. But alas, I did not. So I will talk about them here in hopes that others will look at them as well.
I guess you could say I had some themes going on in my head when I picked up these books, but actually I just grabbed them, didn't really pay attention. But, they are all wonderful historical books.

Henry's Freedom Box: A true story from the Underground Railroad by Ellen Levine and illustrated by Kadir Nelson
An interesting story of Henry "Box" Brown, an escaped slave on the Underground Railroad, who mailed himself to freedom in a box. (A story I would have never believed to be true.) The artwork is glorious and the text is just right to tell a story which is quite heart wrenching. Apparently the paintings for the book were inspired by a lithograph created in 1850 by Samuel Rowse as a fundraiser for the anti-slavery movement. (How inspiring is that- Truly!)
One thing I thought was odd was how rushed the author was in telling this story. I would like to have heard a little more of the story. But C'est La Vie... 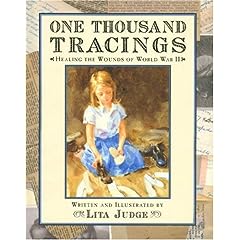 One Thousand Tracings: Healing the wounds of World War II written and illustrated by Lita Judge
The BEST! The best of the three books I read! I cannot even believe this story came from the author finding thousands of paper-traced feet in her grandmother's attic. The book tells the story of a young girl and her mother who tirelessly search for shoes (and other necessities) needed by families in post World War II Europe. The story is so touching and is only enhanced by its wonderful illustrations, some of which are actual photos of artifacts either found in the attic or representative of the things that would have been sent to families. There is so much more behind the scenes of this book, so make sure you read the Author's Note. 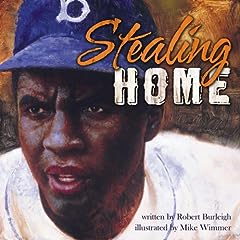 Stealing Home Jackie Robinson: Against the odds written by Robert Burleigh and illustrated by Mike Wimmer
I know what you might be thinking, "Another Jackie Robinson book?" but this one is quite special. The illustrations look just like real photographs! (The pictures are actually oil on canvas.) On each page of the book there is a verse about Jackie Robinson stealing home plate, but what really makes it different is there is also box made to look like an antique baseball card which tells an account or factual aspect of Jackie Robinson's life. I did however, have to read the verse and go back to the cards because it was too hard to read all at once.

~ I am a little too tired to do any links to other reviews tonight, so I may come back and do that later. My apologies.

i gave Henry's Freedom Box to my teacher partner for her b-day last year. such a lovely, lovely, book. nice recs.